This was another breakthrough which opened new ways in fluorescence, with unparallelled sensitivity. Fitted with a 450 Watts Xenon lamp, variable slits on energisation and emission monochromators, variable scan speeds and recorder... 40 years later, the new SAFAS spectrofluorometers are again introducing new standards in fluorescence. In 2015 SAFAS wins the Trophy of Innovation in Paris, among the 76 best international scientific innovations which were competing. We are particularly proud if this success. 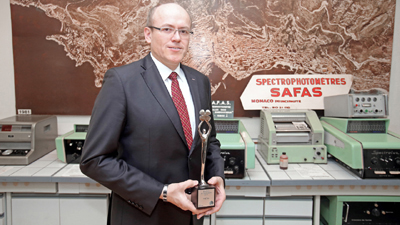 your 2014 SAFAS® spectrophotometer will probably always be working perfectly, SAFAS® engineers will probably always have spare parts available for your former millenium instrument, and agree to make maintenance, we will certainly have free software upgrades compatible with it, and you will probably be very happy of your choice... After all, your company saved a lot of money thanks to you!